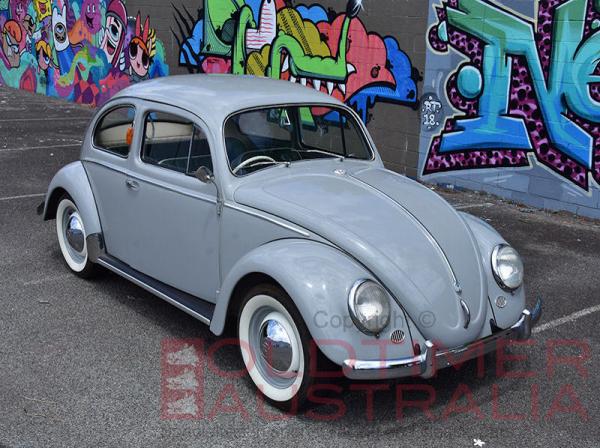 Finance from $183p/w* Get a Quote *Disclaimer

In the early 1930s cars were a luxury. Most Germans could afford nothing more elaborate than a motorcycle. Only one German out of 50 owned a car. Seeking a potential new market, some car makers began independent “people’s car” projects, such as the Mercedes 170H, Adler Autobahn, Steyr 55, and Hanomag 1.3L.
The trend was not new. Béla Barényi, an Austro-Hungarian engineer is credited with having conceived the first basic design in the mid-1920s. In Germany Hanomag produced the 2/10PS “Kommisbrot” a small, cheap, rear-engined car from 1925 – 1928 and Czechoslovakia produced the popular Tatra 7. Ferdinand Porsche had been trying for years to get a manufacturer interested in a small car suitable for a family. He built a car named the “Volksauto” from the ground up in 1933, using many popular ideas and several of his own. Key features of the car were an air-cooled rear engine, torsion bar suspension, and a “beetle” shape with the front hood rounded for better aerodynamics (necessary as it had a small engine).
In 1934 Adolf Hitler became involved. He ordered the production of a basic vehicle which needed to be able to transport 2 adults and 3 children at 100km/h. He wanted all Germans to have access to a car. The “people’s Car” would be available at 990 Reichsmark. A special savings plan was introduced, people could save 5 Reichsmark a week to realise their dream of owning their own car. Over 300.000 people participated in this savings plan. However, the whole project was financially unsound. No private industry was able to meet the requirements and produce a car which could be sold for 990 Reichsmark.
On May 28, 1937, the “Gesellschaft zur Vorbereitung des Deutschen Volkswagens GmbH“ (Company for the Preparation of the German Volkswagen Ltd.) was formally established by the German Labour Front and in 1938 the first prototypes of the “KdF-Wagen” (Kraft durch Freude) started to appear. On 16th September 1938 the company was renamed to Volkswagenwerk GmbH and the company built its main plant in KdF-Stadt which later became Wolfsburg.
The outbreak of the Second World War and integration into the arms industry prevented mass production of the Volkswagen “people’s car”. Instead, military vehicles and other armaments were produced using forced labour.
In April 1945, KdF-Stadt and its heavily bombed factory were captured by the Americans, and subsequently handed over to the British, within whose occupation zone the town and factory fell. The factories were placed under the control of Saddleworth-born British Army officer Major Ivan Hirst, by then a civilian Military Governor with the occupying forces.
One of the factory’s wartime “KdF-Wagen” cars had been taken to the factory for repairs and abandoned there. Hirst had it repainted green and demonstrated it to British Army headquarters. Short of light transport, in September 1945, the British Army was persuaded to place a vital order for 20,000 cars. The rest as they say is history. The Volkswagen or VW Beetle was born. The VW Beetle was an incredible success story and they were assembled from “complete knockdown kits” in many countries around the world, including Australia. The final German built Beetle was completed in 1978, after which the majority of Beetles were built in Mexico. Incredibly, the original Beetle stayed in production through until June 2003 when Volkswagen announced the end of its production. The final original Type 1 VW Beetle (No. 21,529,464) rolled off the production line at Puebla, Mexico, on 30 July 2003, 65 years after its original launch.
Oldtimer Australia is delighted to offer for sale a beautifully restored 1959 Volkswagen Beetle.
To be blunt, a Volkswagen Beetle is probably not a car we would normally handle but we fell in love with this car and just had to have it!
This car is accompanied by its original sales invoice, books (including the service book) and other documentation. This all confirms that this 1959 Volkswagen Beetle was sold as a demonstrator through Stack and Company Limited, 105 York Street Sydney, to a Mr Eric Raymond Dagg from Hurlstone Park (Sydney) in NSW. The sales invoice, which is dated the 19th August 1959, confirms Mr Dagg paid 875 pounds for his ‘diamond grey’ Beetle which was originally registered as BUR 257.
The car remained with its first owner for just over 30 years and when he passed away it was bequested to his nephew, David John Gresser, who had fond memories of this little car. On the 11th May 1991 the Beetle began a new journey and it was sent by train to David in Perth in WA.
The car changed hands on 27th February 2009. It was purchased by Perth based VW enthusiast Colin Seth who embarked on a total nut and bolt restoration. The focus of the restoration was originality and the car was restored in its original colour scheme and to original specifications. The restoration took 8 months and it was completed on 6th December 2009. The car was registered in WA as V1959W. The disassembly and reassembly of the car was done by the owner and it was clearly a labour of love. The restoration was completed by the following specialists:
– Body and paint by Paull & Warner, Perth, WA

– Interior by Trimtec Restoration Co, Wanneroo, WA
There is a beautifully presented photo book of the restoration that will accompany the car. What this shows is the car was meticulously restored with unwavering attention to detail.
The presentation of the car today is a credit to all of its owners and everyone who was involved in the restoration.
The car changed hands in circa 2012 and its next lady owner enjoyed her fabulous Beetle in and around Perth before relocating to Karratha in the north west of WA. She took the Beetle with her and enjoyed the car as a weekend driver in Karratha before her next transfer to New Zealand forced the difficult decision to sell.
The current owner acquired the Beetle from Karratha in 2015 and it made its way back ‘home’ to Sydney. It belongs to a major collector and only a change in direction with his collection has resulted in this stunning Volkswagen Beetle being offered for sale.
Whilst an older restoration, this Volkswagen Beetle still presents beautifully. Finished in its original colour of ‘diamond grey’, the car carries its 10 year old paint exceptionally well. There are a few very small blemishes and stone chips, but you have to look pretty hard. All of the exterior trim, including the chrome, badges, external trim, rubbers and the glass are in very good condition. There is the odd mark on some of the chrome trim, but again you have to look hard. The wheels are also in very good condition. The car is as clean underneath as it is on top.
You open the door on this Beetle to reveal an interior that presents ‘as new’. The green over grey trim with the dark grey carpet compliments the ‘diamond grey’ exterior perfectly. The interior is minimalistic yet very classy at the same time. The head lining is in excellent condition and the carpeted rear compartment looks unused.
The car has been sparingly used in the last 5 years, however, it starts easily and drives exactly as it would have done back in 1959! It is perhaps suffering a little from lack of use in recent times and it would benefit from a service and probably a good drive. That said the car did everything expected of it and it performed really well on our recent test drive. The engine feels strong and the gearbox is good. The car steers, handles and stops as expected and there are no rattles or squeaks. The engine bay is clean and tidy though there are some fuel stains evident around the carburettor.
As they say, a picture is worth a thousand words and the pictures really do showcase this magnificent Beetle in all its glory.
We love it and you can now own it!
Price AUD $39,950.