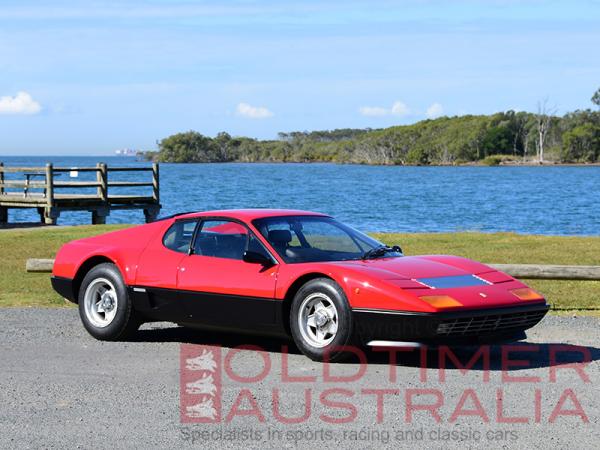 Twelve cylinder engines are synonymous with Ferrari. In fact, Enzo Ferrari’s very first car, the 1947 125S was powered by a 1.5 Litre V12 engine. Throughout the 1950’s and 1960’s the majority of Enzo’s masterpieces were powered by V12 engines of varying capacity. Interestingly all of these cars had the engine located in the front. Cross town rivals Lamborghini introduced their stunning Miura in 1966, which was powered by a transversely mounted V12 engine located behind the driver. This spectacular car took the motoring world by storm and sent shock waves throughout Ferrari HQ in Maranello. Ferraris answer, the 365 GTB/4 Daytona, was a fabulous motor car in its own right, but there was always something about the mid-engined sports car that gave it an edge.
It took until 1971 for Ferrari to unveil its first mid-engined sports car, the 365 GT/4 Berlinetta Boxer. The Boxer was very well received and it ultimately went into production and replaced the Daytona in 1973. Interestingly Ferrari opted for a ‘flat 12’ rather than a V12 engine configuration. The engine was mounted longitudinally rather than transversely as Lamborghini did with the Miura.
The Boxer was a great success for Ferrari and along with the Lamborghini Countach was one of the very real ‘supercars of the seventies’. The 365 GT/4 Berlinetta Boxer (387 cars built) was replaced by the 512 Berlinetta Boxer (929 cars built) in 1976, which was then replaced by the 512 BBi (1007 cars built) in 1981. The Boxer was ultimately replaced by the Testarossa (or ‘red head’ so named to commemorate the fabulous Ferrari race cars of the 1950’s – the Testa Rossas) in 1984.
Oldtimer Australia has had the privilege of selling a number of Ferrari 365 and 512 Berlinetta Boxers over the years and we know these cars very well. We are absolutely delighted to offer for sale this lovely 1978 Ferrari 512 Berlinetta Boxer or 512BB as the car is often referred.
Documentation on file from the Maranello Concessionaires Archives confirms that this particular car was built in 1978 to order 998 and it was finished in rosso chiaro (20-R-190) with a nero leather interior (VM8500) and nero carpets. The car was sold through UK dealer HR Owen, London, UK to its first owner a Miss P Creasey who took delivery of her new Ferrari on the 12th of January 1979. Interestingly the car was ordered on the 9th May 1978.
The car’s subsequent early history is not known, however, DK Engineering was contacted by the car’s then owner to retrieve it from long term storage in 1998. The owner didn’t want to commit to recommissioning the car and it was acquired ‘as retrieved’ by Phil Hughes (aka Hughes Supercar Services in Melbourne, Victoria) who was working for DK at the time. Hughes recommissioned the car in his own time and then enjoyed it for a few years in the UK before he immigrated to Australia in c2000. The car was left in the UK for a few years until Hughes decided to bring it out to Australia in c2003. He enjoyed the car for a year or so and then sold it to the current owner in 2004.
This fabulous Ferrari joined a significant Sydney based collection where it was meticulously cared for and maintained. In 2010 it was given a mechanical refresh, which included an engine and gearbox rebuild, by respected Sydney based classic Ferrari specialist Sal DiMauro.
This is a beautifully presented and driving example of Ferrari’s Berlinetta Boxer. The paint work is in excellent condition all round. The red ‘top half’ has a high gloss and strong depth of colour and the satin black ‘bottom half’ and trim are finished in the correct shade. All of the exterior trim, lenses, glass and the wheels are also in very good condition and compliment the paintwork nicely. Inside the cabin this car is also very well presented. The interior shows just the right amount of patina for a well-cared for car, suggesting that the indicated mileage of 48,691 miles would be genuine. The leather shows some minor wear, but there are no rips and tears and everything just feels right. All of the instruments and controls are crisp and clean and in working order. Open the front and rear clams and the engine bay and front storage compartment are both very clean and well kept.
As with any Ferrari, it really about that mighty engine! The flat 12 on this car starts easily and it soon settles into a smooth idle. On a beautiful sunny Brisbane afternoon everything warms up quickly and you are ready to go. First impressions are that this car is a really well sorted example. It is incredibly tight on the road and the engine pulls like a train. The steering is precise and direct. The suspension feels firm but balanced and there are no rattles or squeaks. The gearbox feels really tight and with a firm but precise movement of the gear lever through the gate the car changes up and down through the gears easily. This 512BB has just had a new set of Michelin XWX tyres fitted, which also makes a massive difference to how these cars drive.
We have handled a number of 365 and 512 Boxers over the years and none have driven any better than this car.
Accompanying this car is a complete briefcase style tool kit, jack kit, space saver spare wheel, photographic record of the recent engine & gearbox rebuild, spare parts catalogue (copy) and an owner’s manual (copy).
Price: $449,950