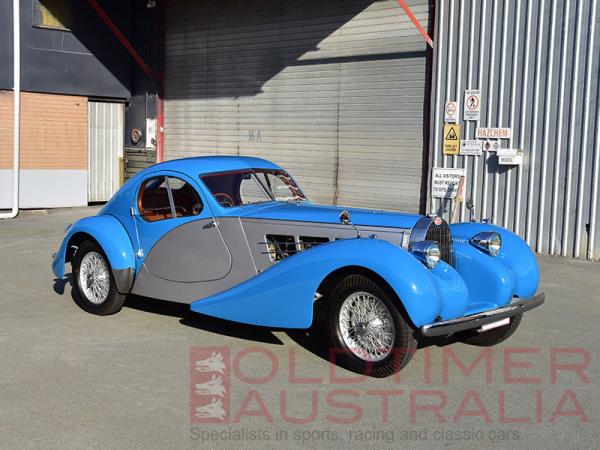 Ettore Bugatti was born in Milan Italy on the 15th September 1881. He was part of a very entrepreneurial and creative family. His grandfather was an architect and sculptor, his father a furniture and jewellery designer of some note and other members of the family were sculptors and artists. Ettore was obsessed with the evolution of the automobile and he founded Automobiles Ettore Bugatti in 1909 in the then-German city of Molsheim, Alsace.
The Bugatti name soon became synonymous with high performance cars. Their road cars were purchased by the rich and famous and their race cars dominated on circuits all around the world.
Models such as the Type 35, the Type 41 (Royale), Type 57 and Type 59 have become legendary and are amongst the most desirable cars ever built.
Oldtimer Australia is delighted to offer for sale a fabulous 1937 Bugatti Type 57 (Type 57C).
This car has a provenance report on file compiled by noted Bugatti historian Kees Jansen in The Netherlands. The car is also documented in the book Bugattis in Australia and New Zealand 1920 – 2012 by Bob King.
Highlights:
– sold new in June 1937 to Alexis Baptifaut who was the President of the company Chargeurs Réunis in Paris, France. Interestingly the ‘livre des livraisons’ (delivery book) states Foire de Bordeax.
– the car was built with a Ventoux body finished in penumbra grey with a tan leather interior.
– post the second World War the car found its way to Belgium.
– the car found its way to North America in the mid 1950’s, where it was restored and it subsequently passed through a number of owners (in the USA).
– Brooks auction house advertised the car for sale in 1999.
– the car was acquired for the current owner by Oldtimer Australia from actor Nicholas Cage in the USA in September 2002.
– at that time the car was in need of restoration and a decision was made to replace the original Ventoux body with an Atlantic style body.
– importantly this Bugatti Type 57 retains its original ‘matching numbers’.
All of the restoration work was undertaken in Australia:
– the body was built by Graeme Smith.
– timber work by Anton Walker.
– paint by Bellbrae Panel & Paint.
– trim by Garry Blackman Trimmimg.
– all mechanical works were completed by Greg Smith, which included fitting a supercharger.
The restoration was completed in late 2008 and the car has been used sparingly since.
Today this fabulous Bugatti presents beautifully. Whilst the car is an older restoration, the paint work is still vibrant and fresh. There is the odd very small blemish or defect evident, but you have to look hard. Similarly, all of the external trim, chrome and glass are in excellent condition. Inside the cabin is ‘just stunning’ and not surprisingly the interior presents like new. The leather upholstery, the timber as well as all the instruments and controls are in excellent condition. The ostrich hide leather is a feature of this car and it complements the timber work and delicate timber steering wheel perfectly. Under the bonnet the engine bay is exceptionally clean and well presented.
Like many Bugattis, the car is a somewhat of a challenge to start. However, once you have the procedure down pat the car will start relatively easily. It’s important to get the right amount of fuel into the manifold using the ki-gas pump. From cold the engine will splutter then settle quickly into a smooth idle. After a short warm up the car is ready to be driven. The clutch takes some getting used to but once you get the feel of it the car is relatively straight forward to drive. On a recent test drive we can confirm that the engine pulls strongly and the car performs out on the open road as one would expect.
There is a Californian title on file in the name of Nicholas Cage that states the mileage as at the 1st December 1999 was 11,148 km. Today the odometer reads 11,598 km, confirming the car has been sparingly used at the back end of Cage’s ownership and since restoration.
Accompanying this car is a good history file containing the Kees Jansen provenance report, restoration receipts & photographs as well as other documentation.
This is truly a world market car and it presents a very unique opportunity in Australia.
Price: AUD $999,950.